The Super Mario (スーパーマリオ) video game series is a series of platform video games created by Nintendo featuring their mascot, Mario. Alternatively called the Super Mario Bros. (スーパーマリオブラザーズ) series or simply the Mario (マリオ) series, it is the central series of the greater Mario franchise. At least one Super Mario game has been released for every major Nintendo video game console and handheld.

The Super Mario games follow Mario's adventures in the fictional Mushroom Kingdom, usually with Mario as the player character. He is occasionally joined by his brother, Luigi, and other members of the Mario cast. As in platform video games, the player runs and jumps across platforms and atop enemies in themed levels. The games have simple plots, typically with Mario rescuing the kidnapped Princess Peach from the primary antagonist, Bowser. The first title in the series, the 1985 Nintendo Entertainment System (NES) release of Super Mario Bros., established gameplay concepts and elements prevalent in nearly every Super Mario game since, including a multitude of power-ups and items that give Mario special powers like fireball-throwing and size-changing into giant and miniature sizes. 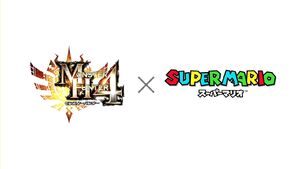 Super Mario made a collaboration with Monster Hunter.

The collaboration was announced on September 9, 2013. It features Super Mario and Donkey Kong-themed Guild Card Backgrounds, and Palico Armor Sets and the following Palico Weapon fashioned after Mario and Luigi: 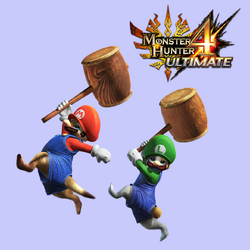 The collaboration was announced on November 5, 2014. It features Palico Armor Sets and the following Palico Weapons fashioned after Mario and Luigi: 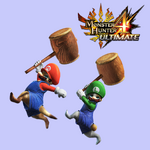 A Felyne skin is available in Super Mario Maker.

Retrieved from "https://monsterhunter.fandom.com/wiki/Super_Mario?oldid=695216"
Community content is available under CC-BY-SA unless otherwise noted.