Start a Wiki
watch 01:46
What is Switch Axe?
Do you like this video? 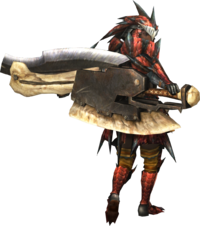 Official description : A powerful melee weapon, capable of such momentum that the hunter swinging it is dragged around by the momentum of each swing. Described as a marvel of technology capable of phantasmagorical might.

The weapon has transformation capabilities, with one blade shifting while being sheathed as well as sliding to a different position to change its attack style. In its secondary form, the weapon behaves far differently from its standard variation and uses a phial of specialized coating to add certain effects to the weapon. The weapon is also able to overload this phial, ending in a concentrated burst. 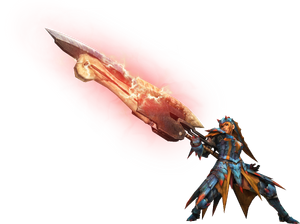 The true power of the weapon is its versatility, with the 2 different forms and the combos to link the two types together. Rather than dodge rolling, the Switch Axe has a quick step to the side, allowing the user to keep focused on his attack while keeping out of harm's reach.

It consists of two forms: Axe and Sword. The axe possesses a great range and can hit difficult-to-reach parts of the monsters very easily, especially with the rising slash which can even hit a Rath's wing while it is flying. It also has a potentially infinite combo which is limited by stamina. It consists of swinging the axe very quickly from left to right and right to left after a rising slash. Apart from that, its power and mobility are similar to Long Sword's without spirit bar effects.

The Sword mode, which uses the phial, looks similar to Great Sword in form, but is a much faster weapon with less powerful attacks when compared to GS. The player can simply hit with vertical or horizontal combos to benefit from the phial effect, and can also make a concentrated burst (or discharge): after a forward slash, the weapon will rise while dealing damage, then produce a powerful explosion which produces recoil and makes the weapon revert to axe mode. Of course, this move will still benefit from the phial effect.

The time spent in Sword mode is limited to an energy meter found under the Sharpness indicator. The bar only decreases when the weapon is swung while in Sword mode. Of course, standing around and looking at your marvelous Switch Axe in Sword mode does little to slay your target. Once this energy bar is depleted, the weapon will change back into Axe form and will need to be reloaded before going back into Sword form. The energy meter automatically recovers over time, but can be "reloaded" 40% by attempting to switch to sword mode while below 40% charge.

Every switch axe is imbued with one type of phial, which boosts their capabilities while in sword mode. The types and effects of the phials are as follows:

The Monster Hunter Wikia does not take credit for these videos

Retrieved from "https://monsterhunter.fandom.com/wiki/Switch_Axe?oldid=828477"
Community content is available under CC-BY-SA unless otherwise noted.