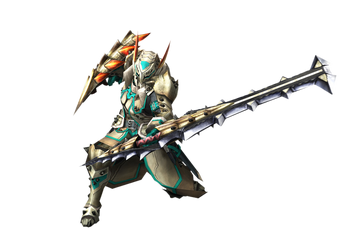 Sword and Shield (片手剣 Katateken), focuses on using a wide variety of elements or statuses to cause considerable damage.

The sword and shield class is the first type of weapon that hunters use in the Monster Hunter series. Also known as the SnS, this type of weapon uses speed and agility to inflict long combinations of status-inflicting attacks quickly. A hunter is able to perform a rolling dodge, is able to run normally with the weapon drawn, and is able to suppress weak attacks with the shield while blocking. The hunter can also use an item while the sword is drawn. While they are the fastest and most agile kinds of weapons, Swords and Shields typically have very weak raw damage. To compensate for this, the SnS attacks quickly and many of the weapons in this category are imbued with powerful elemental properties or cause Poison, Sleep or Paralysis. This makes them one of the best melee weapon to induce Status Effects. 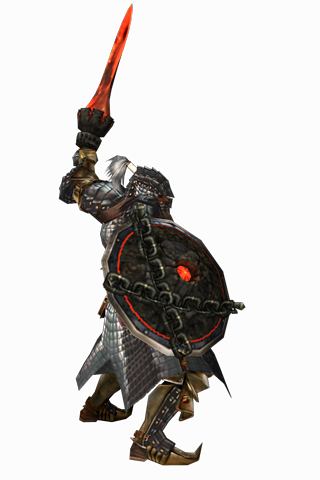 Sword and Shields have some of the lowest average damage levels, but are extremely capable in a variety of other aspects, such as inflicting status ailments.

Back in the original Monster Hunter, the Sword and Shield weapon type was generally weak; it bounced more than any other weapon and the attack was so weak that every Wyvern would be a decent challenge.

However, in and after MH2, the SnS was changed: not only does the sharpness last longer but items can also be used while drawn. The SnS is largely regarded as the most balanced weapon in the game. It can cut through the sturdy Gravios skin with only green Sharpness and rarely ever bounces off any monsters' shell. It also gained a new attack: by pressing "R," the second strike from the leap combo can be performed.

In Monster Hunter 3, many changes took place, but most notably the hunter can bash the monster with his/her shield, to perform an impact damage attack that can KO a monster, although it is not a very strong attack and still causes sharpness loss. This shield bash does not inflict elemental damage, but has the unique ability to hit without bouncing. Also, a side slash attack was added, as an alternative to the spinning slash as a finisher.

Monster Hunter Frontier greatly entices the player to use the SnS by gifting it a range of new moves, ranging from a devastating explosive slash, to the all new uppercut leap slice capable of delivering full damage to a high up area, and if the SnS was not lightweight enough, between slashes the hunter may make a quick dash to correct him/herself if the monster has turned away.

In Monster Hunter Frontier, the jump attack can be used with a mouse scroll, standard slash combos with left-click, blocking with "Q", and round slash with right-click.

No great changes were made to the Sword and Shield between MH3 and MHP3rd, but it seems to be capable of inflicting slightly more damage than before.

In MH4, the Sword and Shield has two new moves: When attacking the hunter can hop back while attacking and do another combo on the monster or the hop back can lead to a stronger charge jump attack. Also the leaping attack is now replaced by a forward lunge. Like other weapons, SnS can now attack mid-air when jumping off a ledge, and also gain an aerial attack when climbing up a ledge as well.

In MHGen, SnS now can use items called Oils, with the following effects added to the weapon on use:

Only one can be effective at once, and the effects last for a limited time. However, they can be used with all hunting styles.