Taikun Zamuza are Carapaceons covered in multiple layers of armor. Typically they are seen covered completely in an layer of dirt, rock, barnacles, mushrooms, and some plant life.

Underneath the environmental armor is a orange and cream colored giant with some resemblance to Horseshoe crabs when viewed from above, with segmented plates of armor with some spines lining the back, leading down to an limp extension that resembles a tail, and more small spines spread throughout the rest of the body. The outer armor has an opening for the mouth but none for the eyes, the arms end in asymmetrical claws, the left is quite large and bulky, resembling a curled boxing glove, while the right is like a traditional pincer, aside from the upper claw being elongated and spear like.

And beneath all the armor is a slightly smaller white creature with blue and yellow patterns on its more smooth back and very light blue eyes, the "tail" is gone, and on the back of it on either side, between two large blue spikes each, are visible electrical coil-esque shaped organs. The pincer claw remains pretty much as it was, but it is revealed that beneath the "hammer claw" is a singular claw with a spiral shaped point that bends in the middle, allowing it to fit within the space of the outer armor.

When buried beneath all of their armor, Taikun Zamuza are fairly slow moving, but have a lot of weight to throw around, making them physically threatening, using the "hammer claw" to crush, cause quakes, use as a shield, and even slowly uppercut, or breaking the floor open, while the spear point of the pincer is used for slashing and stabbing. The fungi rooted around the environmental armor will also react to the armor being damaged, releasing large vision obscuring clouds of spores. The more the environmental and outer armors are broken, the faster the Taikun Zamuza will become due to the lesser amount of weight to carry, coming to a head where it is all broken away.

Once all the armor is gone, the Taikun Zamuza move much quicker, using both of the sharp tipped claws to stab at hunters with lunges, and downward strikes which can occasionally bring back a rock to smash, and even tunneling around the area and trying to dive into targets. The electrical organs on their backs revealed in full force allows them to release traveling sparks, small blasts, and even creating and balancing large sphere's of electricity between their claws to drop onto hunters heads.

Lastly, Taikun Zamuza are capable of spitting globs of a toxic substance from their mouths.

When beneath all their armor Taikun Zamuza are relatively docile, preferring to camouflage into their cavernous habitats, but will attack viciously if attacked themselves, once all of their armor is destroyed, they throw caution to the wind and go completely offense, or attempt to flee.

Taikun Zamuza inhabits cavernous areas such as those of the Tide Island, and Esther Lake. 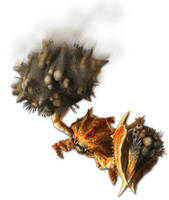