Taizo (Japanese タイゾウ) is one of the many Legendary Rastas found within Mezeporta Square. He specializes in using the Gunlance. 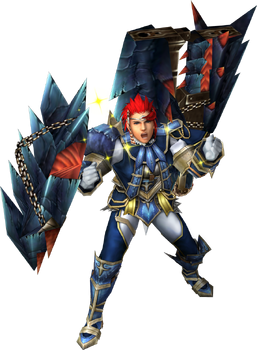 Taizo is considered to be a very weird and annoying person.

Though not much is known about Taizo's past, he is most well-known for his iron gut and his skills with the Gunlance. Taizo can eat just about anything, even with some of the worse ingredients, and still want more after eating. Though he is a big eater, his skills with the Gunlance is more than just legendary. Taizo fights in a bold, risk-taking way that could potentially get himself killed. Despite this style of fighting, Taizo has continued to live on. He is also known to be loved by women everywhere from his charming looks.

Taizo wears Chasse armor, along with Lavi Barretter F, and he uses many different types of Gunlance.

Retrieved from "https://monsterhunter.fandom.com/wiki/Taizo?oldid=749181"
Community content is available under CC-BY-SA unless otherwise noted.