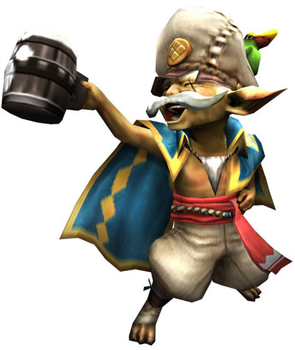 He is known for taking many risks while working. His main addiction is drinking as he works. When he is drunk, the Tanzia Port Boss is said to turn into a pervert.

Not much is really known about the Tanzia Port Boss's past, outside of his drinking habits. In Port Tanzia, he is known to give hunters advice before they go out on hunts and help them in any ways possible. It is also said that he is aware of an unknown monster that attacked the port in ancient times.

Retrieved from "https://monsterhunter.fandom.com/wiki/Tanzia_Port_Boss?oldid=748954"
Community content is available under CC-BY-SA unless otherwise noted.