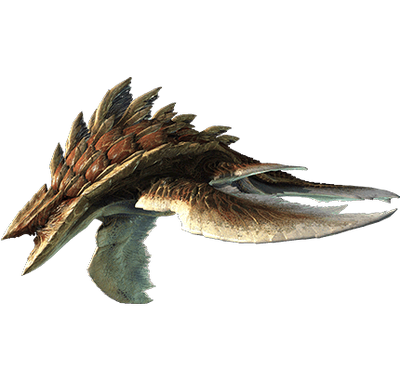 Tartaronis is a rather large Elder Dragon that resembles a sea turtle. Its facial structure is odd, with the top of its head having a distinctive pointed look to it. Its lower jaw is similar looking, bearing a resemblance to Ukanlos. On its back are several moving spikes that shift in and out whenever it moves or takes to the skies. It has a very long tail fin which holds greater length than its main body.

This Elder Dragon's abilities tie into manipulating sand. While on the ground it often fires out blasts of sand from its back or fires off a larger projectile from its mouth. When it takes to the air it causes 4 tornadoes of sand to appear. This beast also surrounds itself with what appears to be an aura of sand. In addition to that while airborne it fires off projectiles from it's back far more frequently than on the ground.

Tartaronis is very aggressive, attacking any intruders treading along its sands.

Retrieved from "https://monsterhunter.fandom.com/wiki/Tartaronis?oldid=862400"
Community content is available under CC-BY-SA unless otherwise noted.