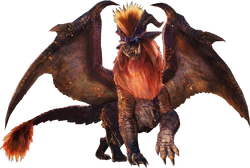 Teostra is an Elder Dragon that appears in Monster Hunter: World. This brutal elder dragon is wreathed in flames that spit blazing fire. Teostra are of such a fierce and deadly nature that the guild closely monitors their movements. They can be found in the Wildspire Waste and the Elder's Recess. Their materials can be used to craft the Teostra Armor Set.

Teostra is capable of producing a dangerous fire aura that deals constant damage over time to hunters standing nearby. Teostra's supernova no longer stuns alongside having a longer casting time. Teostra will not atatck hunters on sight. The air becomes filled with embers when Teostra is in an area. Teostra's roar requires Earplugs Lv5 to block.

Unlike many fire wyverns such as Rathalos who simply shoot fireballs, Teostra breathes out a stream of fire similar to a flamethrower.

Teostra is a very aggressive monster. It will show dominance to anything that it encounters. Unlike Lunastra, who gives warnings to get out of its territory, Teostra will ruthlessly attack intruders until they are dead. Teostra is known to cooperate with Lunastra if she is present in the same map. Teostra will now do a “bonding attack” with Lunastra which will result in double supernovas.

Teostra can have Turf Wars with Nergigante and Kushala Daora.

Teostra is the target on the following quests:

The following is a complete weapon list for Teostra weapons:

Add a photo to this gallery
Retrieved from "https://monsterhunter.fandom.com/wiki/Teostra/Monster_Hunter_World?oldid=777873"
Community content is available under CC-BY-SA unless otherwise noted.