Start a Wiki
watch 01:25
Who is Tetsucabra?
Do you like this video?

Ice (only in Frozen Seaway)

Iceblight (only in Frozen Seaway)

Tetsucabra [1] is an Amphibian introduced in Monster Hunter 4. 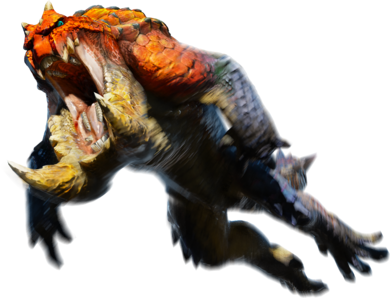 Tetsucabra is a large Amphibian with a striking orange and indigo coloration. Its lower jaw harbors large tusks along with a large set of molars that are capable of crushing prey with ease. Tetsucabra also has a spiky stubby tail that swells up when angered.

Tetsucabra is capable of lifting up large boulders like a forklift and tossing them at attackers. It will also use the boulders as shields against attackers and to block off paths in areas. Utilizing its extremely powerful jaws, Tetsucabra can crush boulders, sending shards flying to damage enemies. It is also capable of spitting a green globular substance that can momentarily sap its prey's stamina.

Tetsucabra is known to inhabit the Sunken Hollow, where it ambushes its prey from pools of water. It can also be seen in the Frozen Seaway and the Everwood.

Tetsucabra's Japanese name (Tetsukabura) is a reference to the Japanese word for iron, "tetsu", as well as words meaning "demonic" and "stubborn", in order to reflect the monster's personality. The English name was an attempt by the localization department to remain close to the original name, as the monster itself is designed based on many Japanese concepts such as sumo wrestling and various Japanese architectural features. As a result, the decision was made to simply romanize the Japanese name.

A Deviant of Tetsucabra first appearing in Monster Hunter Generations.

Retrieved from "https://monsterhunter.fandom.com/wiki/Tetsucabra?oldid=818868"
Community content is available under CC-BY-SA unless otherwise noted.