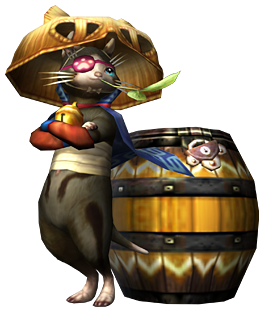 The Transpurrter has a rather peaceful personality, though speaks in a rough manner.

Not much is really known about the Transpurrter's past. What is known is that he hates stealing, unlike most Melynx. From this, the Transpurrter is considered to be a rarity among them. In society, he transports and delivers a vast variety of items to any who request such from him. He usually transports items belonging to hunters in the field, though can sometimes be a delivery service for not just the Hunter's Guild, but also for some Lynian tribes.

He wears an eyepatch, a blue cape with a bell, and a hat in the shape of a Lynian's parts. The Transpurrter is also known to have a stem in his mouth and to roll around on a small barrel.

Retrieved from "https://monsterhunter.fandom.com/wiki/The_Transpurrter?oldid=749185"
Community content is available under CC-BY-SA unless otherwise noted.