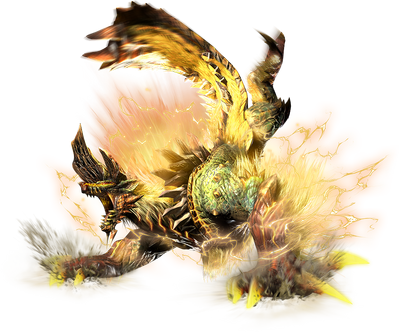 In its default state, the Thunderlord Zinogre resembles a fully-charged Zinogre. One of its horns is much larger than the other, its scales are green instead of the normal blue, and its fur and claws are gold. The Thunderlord Zinogre crackles with green electricity, which turns to a golden color when it enters its "Ultracharged" state.

Thunderlord Zinogre are truly dangerous monsters that are stronger than a normal Zinogre. Hunters are required to have a special permit in order to hunt them.

Thunderlord Zinogre lives in almost any environment their relative lived.

Retrieved from "https://monsterhunter.fandom.com/wiki/Thunderlord_Zinogre?oldid=829548"
Community content is available under CC-BY-SA unless otherwise noted.