Tiala (Japanese ティアラ) is one of the many Legendary Rastas found within Mezeporta Square. She specializes in using the Light Bowgun. 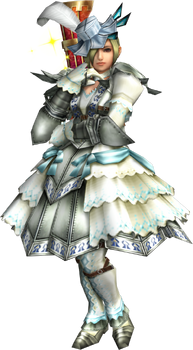 Tiala can be best described as a Spoiled Princess. Compared to her sister, Uwel, Tiala is rude and arrogant.

Tiala comes from a wealthy family that taught her how to snipe using the Light Bowgun. This family was once a legendary clan, however, that soon ended. While in her father's care, the clan had eventually fell from power. Now sniping has become a favorite hobby of hers, especially while hunting in the field, along with a continuous taste for wealth. Sadly though, both hunting and wealth are where she shows the most common sense. In most other places, she shows very little common sense, such as cooking and her violent weapon rivalry with Natasha.

Retrieved from "https://monsterhunter.fandom.com/wiki/Tiala?oldid=749187"
Community content is available under CC-BY-SA unless otherwise noted.