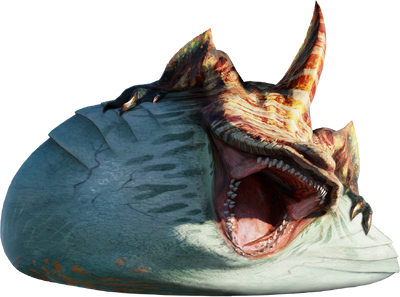 It has an orange-brown body color with some red shades mixed in it while fins and belly are more blueish.

Just like its arctic counterpart, the sandy Tigerstripe Zamtrios retains the same attacks, but seemingly able to use them better. For one, it can immediately inflate itself, and start a rolling attack right away, instead of doing so after taking enough damage. Furthermore, it is capable of leaping in this form, clearing an area in a single bound. It can also shoot a stream of water that allows it to deflate itself, back into its normal size at will. It is also capable of spitting globs of paralyzing fluid at enemies, but, unlike the regular Zamtrios, it can't create any armor around its body.

The English name, Tigerstripe Zamtrios is in reference to the pattern of the monster's skin. It also matches the monster's Japanese title, torazame.

Retrieved from "https://monsterhunter.fandom.com/wiki/Tigerstripe_Zamtrios?oldid=804801"
Community content is available under CC-BY-SA unless otherwise noted.