Start a Wiki
watch 01:34
What is Tigrex?
Do you like this video?

Ice (On icy and snowy terrains)

"A flying wyvern straight out of prehistory, known for its deafening roar and powerful legs that drive its overwhelming charge."
— MHWI Description

Tigrex is a large, quadrupedal wyvern characterized by its massive head and jaws, powerful limbs and striking yellow/blue striped coloration. The top of its head is tipped with a pair of horn-like ears, and its segmented tail ends with a spiny protrusion.

As a quadrupedal wyvern, its wings have evolved into forelegs, which allows it to run at very fast speeds. Though it possesses a pair of adequately-developed wings, it is rarely seen flying in a traditional sense. It is in fact more prone to gliding from location to location. It has a powerful set of lungs which gives it the ability to produce extremely loud, concussive roars which can physically damage nearby objects. Unlike many other monsters, Tigrex does not attack with any elements, a trait it shares with the Monoblos and its cousins. Rather, it relies on its sheer brute strength and an ear-splitting roar to bring down opponents.

Tigrex will usually attempt to intimidate would-be attackers with an ear-splitting roar. If combat becomes intense enough, it will flush blood to its forelimbs, face, and eyes, in order to give its skin a bright-red glow as an effort to further intimidate attackers.

The Tigrex can be found in many different environments. Like many wyverns, it will travel far and wide in search of prey.

For carves and materials from other games, see Tigrex Carves

A Deviant of Tigrex first appearing in Monster Hunter Generations.

Season 9.0, Tigrex is considerably improved. It now has slightly enlarged horns and is missing one eye; it also has several new attacks, including: a tail-brush, where it wipes its tail in a 180 degree arc behind itself; a vastly improved roar, which covers a far greater area; a frenzied series of agile leaps; a double 360 degree body spin; and finally a triple forward bite.

HC Tigrex is an older dominant male with longer horn/ears, blue tinted wings and roaring power stronger than the Brute Tigrex, though it cannot hold a roar as long. It is known for fast unexpected movement, roars focused into an invisible sonic beam easy to spot from sand or snow being blown, an attack were it jumps left-smashes with its foot to the right then jumps ahead to the right and turns then runs back to face its target, double spin attacks like its subspecies and roars so loud the ground cracks beneath it and the air stills as a shock wave reaching beyond its body range. 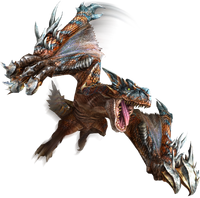 Retrieved from "https://monsterhunter.fandom.com/wiki/Tigrex?oldid=843217"
Community content is available under CC-BY-SA unless otherwise noted.