View source
watch 01:39
What is Tobi-Kadachi?
Do you like this video?
Play Sound

Tobi-Kadachi's face resembles a colubrid in appearance with grayish blue scales covering its slim squirrel-like shape. On its back are patches of white fur as well as a bushy tail covered in rows of spikes. Its front limbs also have a few spikes. Tobi-Kadachi's head, claws, back and tail can be wounded.[1] When the monster is fully charged the fur on its back will stand up.

Tobi-Kadachi has a number of strong similarities to the stronger and larger Zinogre; both are thunder-element, both are quadrupedal with a similar body shape, both have a "cape" of fur running back to a broad and spiny tail, and both are extremely agile and have a penchant for aerial moves.

As Tobi-Kadachi fights, it picks up static electricity in its fur by brushing against trees and the ground. Tobi-Kadachi uses this static electricity to increase the strength of its attacks. Master-Rank Tobi-Kadachi can charge up at will, and has a second charged state it can also achieve. Like a flying squirrel, Tobi-Kadachi has a membrane between its limbs that allow it to glide for long distances. In Rise, it can launch its electrified hairs at foes similar to its subspecies.

In Master Rank, Tobi-Kadachi gains the ability to overcharge itself if it is allowed to cling on a wall surface for an extended period of time. Its whole body will glow silvery in this state and its thunder element power becomes extremely potent, although its movement speed is considerably reduced as a result. Part-breaking its tail can disable this ability entirely.

The following is a complete weapon list for Tobi-Kadachi weapons: 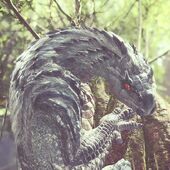