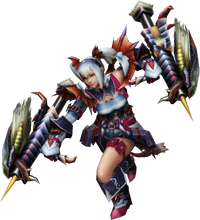 The Tonfa (穿龍棍 Senryūkon: "Piercing Dragon Stick") is a Weapon Type introduced in Monster Hunter Frontier G Genuine. It is an Impact type weapon. The more attacks hunters make with the weapon, the more it charges up in power. It also has the ability to guard and dash freely.

The Tonfa is made up of two light, swift poles with a propulsion system. This allows the hunter to strike monsters multiple times in short periods. Because of the light weight and propulsion system, hunters can easily evade while the weapon is drawn and even propel themselves from the ground. The propulsion system also enables the hunter to perform a finishing move called "Dragon Spirit Piercing Attack" (龍気穿撃) where the poles of the Tonfa are quickly jabbed at the monster with tremendous force. By performing this move on a monster when parts of the monster have been sufficiently weakened, it will trigger explosions on the monster where it has been weakened. Every body part on a monster can be weakened and is recognized by a red, wispy aura that is emitted from the weakened part.

Similar to Long Sword, the Tonfa has a gauge that fills up when attacking monsters in order to gain an attack boost (Earth Style). This bar has 5 levels of boosts and a timer (6 when using the Piercing Phoenix skill). When striking a monster, the semi-circular timer to the left of the bar will fill up with several seconds and begin dropping while the bar level fills. Every time that the Tonfa strikes a monster, the timer refills and the boost bar increases. All attack boosts will be lost if the timer runs out.

The Tonfa has 2 different modes: long mode and short mode. Each mode shares the basic attack moves, KO damage on head strikes, finisher and pole launch while still having unique moves and abilities.

Long: Normal impact zone damage. At the end of the main button attack combo, the hunter can perform a charged attack. While midair, the secondary attack button creates a spinning drop attack.

Short: Reversed impact zone damage. At the end of the main button attack combo, the hunter can perform a short series of swift attacks. While midair, the secondary button creates a rolling kick attack that will cause the hunter to bounce back and a little upwards if the attack strikes a monster. This allows the hunter to remain airborne.

The Tonfa finisher goes beyond the expected damage of the strike. Using a finisher on a monster when it has a point(s) with enough Dragon Spirit will cause the monster to take damage from a delayed explosion at the inflicted points after the initial strike. Once this explosion occurs, a secondary effect can be seen on the monster depending on the weakened part(s) at the time of the finisher.

Head: The monster is surrounded by a burning, yellowish aura. All strikes to the monster will cause KO damage, regardless of damage type or location attacked for a short time.
Monsters that can't be KOed will have one of the other effects trigger from their heads. (Lao-Shan Lung, Fatalis, Yama Tsukami, Yama Kurai)

Body: The monster is surrounded by an emitting, orange aura. This is a chance for Hunter's close enough to recover a small amount of weapon sharpness, as well as a small attack boost for a limited time.
An active Heat Blade on a Gunlance prevents sharpness restoration for the hunter.

Tail: The monsters tail will be injured, left bleeding and taking damage, even if the tail cannot be cut or has already been cut. The bleeding lasts for a short period and causes cutting damage to the tail. If enough damage is done to the tail during or prior to this state, the tail will be severed/broken.
Monsters without a lone tail hitzone will have the bleeding effect trigger from another location. (Iodrome, Lao-Shan Lungs neck, Fatalis' wings)

Salvage: An effect that is on all small monsters and very few large monsters heads. (Lao-Shan Lung, Fatalis, Yama Tsukami, Yama Kurai) If the Hunter is able to inflict enough Dragon Spirit to small monsters before slaying them, using the finisher will cause them to drop a shiny, this drop is based on the monsters carve rates. 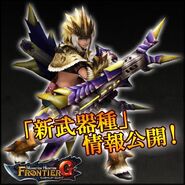 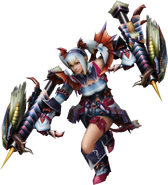 Tonfa from the MHF-GG Premium Package

Tonfa from the MHF-GG Premium Package 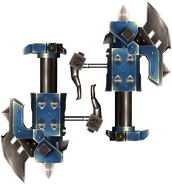 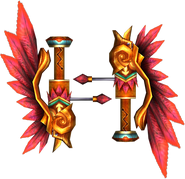 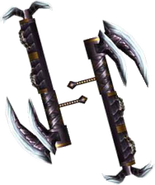 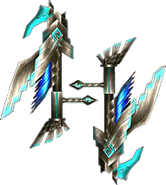 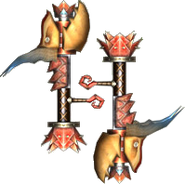 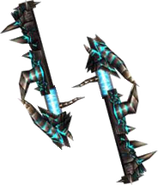 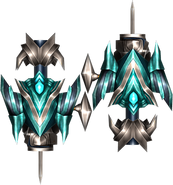 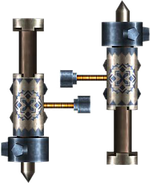 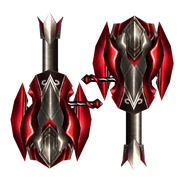 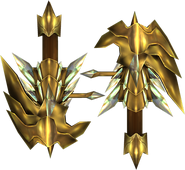 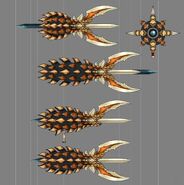 Guarding with the Tonfa