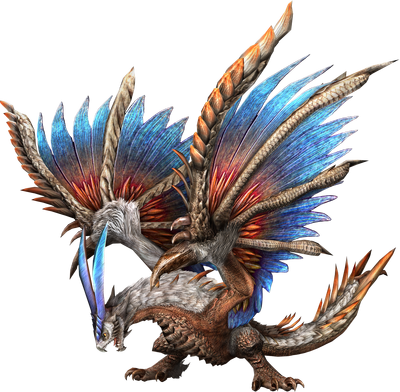 Toridcless has a specialized head and beak, similar to that of a bird of prey's, which is with filled small, sharp teeth. Nearly its whole body is covered in small, white feathers, along with sky blue feathers projected from its wing feathers and dual crest. Its underbelly is mostly covered by scales. On Toridcless' back, wings, and tail, are small dagger-like spines.

Toridcless is able to produce powerful lightning-based attacks. It is able to do this by gathering and converting solar energy into lightning. With this lightning, Toridcless can even make powerful flashes like Gypceros. On its back and wings are spines that can be thrown at enemies by Toridcless.

Toridcless are said to be mild-mannered.

These Bird Wyverns can be found living in the Gorge and Highland, and appear in the Bamboo Forest and Fortress Ruins.

Retrieved from "https://monsterhunter.fandom.com/wiki/Toridcless?oldid=829996"
Community content is available under CC-BY-SA unless otherwise noted.