Trenya is an adventurous Felyne that is shy and that can be easily surprised.

Trenya travels to various regions in his boat. On his adventures, Trenya can help gather items for hunters, some of which can only be obtained through him. Some of these task may include attacking large monsters like Tigrex in order to get certain materials. From such task, he even has his own fan club. He has learnt how to do this from his master, Treshi, and continues to learn more from him. Though Trenya loves searching for treasure, he will occasionally go on vacation for his own well being and safety.

He wears a yellow helmet and vest. 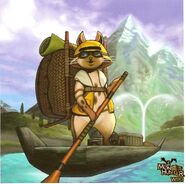 Retrieved from "https://monsterhunter.fandom.com/wiki/Trenya?oldid=749189"
Community content is available under CC-BY-SA unless otherwise noted.