Dragon
(Neck and Stomach only during 4th, 5th and 6th Rage Mode)
Head (Cutting) and Stomach (Impact) but gradually reverses with each rage mode for damage on Head.

Unknown superficially resembles a fusion between the Old World species of Rathian and Rathalos but with very noticeable differences. Its color scheme is mostly black and dark grey with its talons, wing claws, most of its tail spikes, and some parts of its back plating being a crimson red. Its wing claws are long and have a downward curve, and its tail club has a few small spikes lining both sides, and culminating in a larger reddish orange spike tipping it. Unknown notably has more than one enraged state most of them changing its appearance a bit.

In its first state it starts huffing black smoke.

In the next changing state it starts huffing blue and yellow flames.

And in the final state crimson red flame patterns appear on its wing membranes as its eyes turn a glowing crimson red.

Unknown have numerous abilities that make them incredibly dangerous opponents. They are fast and very powerful, can breath spheres and beams of flame in various ways, have venomous talons that are also strong enough to tear chunks out of the ground and crush them, they can throw their wing claws as potent projectiles which regrow in little time, and can even release a short ranged corrosive gas cloud. But their most infamous ability is their tempers. The angrier they get the faster and stronger they get, with their bodies changing in accordance. Unknown will also do large sidesteps to reposition themselves and momentarily get out of most hunters range.

There have even been reports of Unknown able to create enormous pitch black clouds of gas to obscure their opponents vision leaving them wide open for attack.

Despite their hostile appearances and infamously destructive tempers Unknown are actually rather peaceful when calm and somewhat sluggish, atleast until something threatens them, attacks them, or they see said thing as food, by that point their ferocity and true strength shows itself. Unknown are also known to gather in large numbers in arid deserts during certain seasons for unknown reasons. 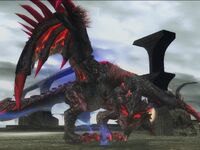 Unlike normal Unknown Black Flying Wyvern's, this kind is able to have its quest posted at will during certain weeks atleast on average. SR300+ is the rank limit for this quest.

At first glance it seems like nothing is different outside of the reddish pink tips to its red parts but as it goes through its enraged states it uses new moves and has shocking attack strength compared to the normal ones.

New moves include a stronger version of Espinas Subspecies charged fireball that makes sparks on the edges out of range of the main explosion that explode after a moment, a move just like HC Espinas Subspecies where it ducks its head charging then spits a fireball into the air that then breaks into multiple fireballs that fall at random and up to four that home in and fall on all hunters that are not directly under the monster, jumping then flying at extreme speeds in a circle dropping spikes all around that hit so hard they break the ground much like a Doragyurosu making a Dragon Element storm.

Supremacy Unknown also has an extra sixth Rage Mode with a blue aura surrounding it that it starts with using a new move where it stomps to its right causing a giant chunk of the ground to lift knocking any hunters into the air then the same to its left followed by a roar that anyone close enough becomes stunned with KO and lastly an extremely powerful attack that makes it feared where it makes a blast of wind lifting off the ground so strong the push can kill alone followed by diving and sliding chasing a target and hitting the same ones it already knocked into the air making sure they die with extreme attack power causing the ground to break as it slides able to kill at even 1000 defense. 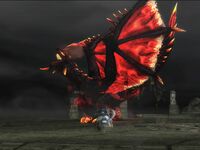 Unknown is one of two monsters to receive a Solstice War variation alongside Disufiroa.

For the most part the fight seems the same as Supremacy Unknown sixth Rage Mode and all only it's a bit faster, a bit stronger, and a bit more durable.

It starts with the Unknown flying off before a few seconds later a storm of black wind starts tearing apart the Tower sending large pieces of rubble into the air to rain on the area for a bit, before the Unknown reappears crashing down into the middle of the area. Its body even darker, its eyes and mouth glowing yellow, its body spines, claws, and talons red with yellow tips, and its wing membranes red with brighter edges and pitch black wing patterns, all topped by a red and black aura radiating around it, vents between the scales on its legs glowing red, and its eyes leaving small red trails as it moves. The Unknown roars in absolute fury upon landing as the final phase begins.

New attacks in this phase include but not limited too:Unknown stomping the ground creating large cracks around it before charging and releasing a fire ball that explodes in a large radius the second it leaves its mouth, leaving the cracked areas emitting black smoke, before quickly charging and releasing another making the cracks create even more smoke, and then charging one more taking to the air and blasting it at the ground finishing with a large explosion. A fast far sliding "hipcheck". Charging then breathing flames at the ground in a circle surrounding it, which creates small blasts around it, leaving a circle of fire around it for a few seconds, finishing with it spreading its wings sending the flames away from it a decent distance. And perhaps most famously, creating an area wide black cloud of gas that leaves only its eyes completely visible for a little bit, during this time the Unknown will be quickly moving all around the hunters, occasionally taking to the air and corkscrewing towards them, when time is up it will stop moving, inhale all the gas towards its mouth, before releasing it all at once in a huge shockwave, it will then finish with a roar in the typical Rathian fashion.