View source
watch 01:39
What is Uragaan?
Do you like this video?
Play Sound

Third
Uragaan is a Brute Wyvern introduced in Monster Hunter 3.

Uragaan is covered in a lustrous gold-colored hide. Its back is lined with hard crystals and its chin is plated with a rock-like shell, suggesting the Uragaan has evolved a tough exterior due to life in volcanic regions. Its underbelly is covered in a sticky, tar-like substance which it uses to affix explosive rocks to itself.

Uragaan's signature ability is to roll its body into a wheel to increase its speed and agility. It will do this often in an attempt to crush the hunter. Uragaan may conduct either a short roll, or a longer one where it may roll in a figure eight for another stab at the hunter. It can also produce sleep gas or, when enraged, emit flames, much like Gravios. This will put Hunters to sleep or inflict Fireblight. The effect depends on the color: ghost-blue or red-orange respectively. Uragaan will use its large jaw to attack, primarily by slamming it into the ground. It may also attack with a wide tail sweep, which flings explosive rocks into the area. If this has been done, the next time Uragaan uses a heavy jaw smash, all explosive rocks in the area will explode in a manner similar to Barrel Bombs.

Uragaan is found primarily in the Volcano region. It is completely at ease in the rocks and lava that makes up its home. Sometimes Uragaan can be found in the temperate Deserted Island as well. 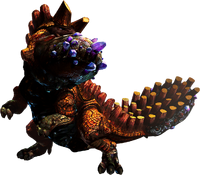 A Deviant of Uragaan first appearing in Monster Hunter Generations.

A Variant of Uragaan that appears in Monster Hunter Explore.