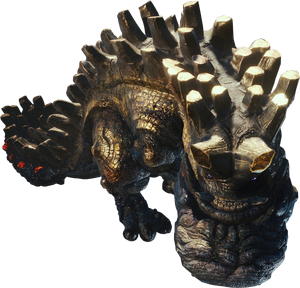 Uragaan is a Brute Wyvern that appears in Monster Hunter: World. This Large brute wyvern feeds on ore, and uses their mighty jaws to crush solid rock to powder. They've been known to confront Lavasioths over territory disputes. They can be found in the Elder's Recess. Their materials can be used to craft the Uragaan Armor Set.

Uragaan's signature ability is to roll its body into a wheel to increase its speed and agility. It will do this often in an attempt to crush the hunter. Uragaan may conduct either a short roll, or a longer one where it may roll in a figure eight for another stab at the hunter. It can also produce sleep gas or, when enraged, emit flames, much like Gravios. This will put Hunters to sleep or inflict Fireblight. The effect depends on the color: ghost-blue or red-orange respectively. Uragaan will use its large jaw to attack, primarily by slamming it into the ground. It may also attack with a wide tail sweep, which flings explosive rocks into the area. If this has been done, the next time Uragaan uses a heavy jaw smash, all explosive rocks in the area will explode in a manner similar to Barrel Bombs.

The following is a complete weapon list for Uragaan weapons:

With Bazelgeuse
Add a photo to this gallery
Retrieved from "https://monsterhunter.fandom.com/wiki/Uragaan/Monster_Hunter_World?oldid=777876"
Community content is available under CC-BY-SA unless otherwise noted.