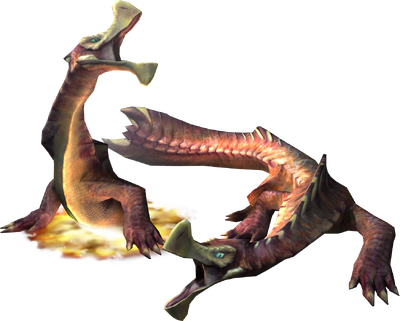 Just like their adult form, the Agnaktor, they have the remarkable ability to tunnel through solid volcanic rock. Uroktor are distinguished by their reddish-purple skin, which protects them from both the sweltering heat and volcanic predators.

As a minion monster, Uroktor are naturally unremarkable. They move about the field by burrowing, and can attack in 3 ways. Their primary method of attack is to pop up directly beneath the hunter with a drilling-jump, while occasionally they will simply sit half-exposed and spit a gob of fire at any hunters nearby. Although rare, when an Uroktor is standing fully exposed on the ground they will, occasionally, attempt a leviathan's signature double-bite.

Retrieved from "https://monsterhunter.fandom.com/wiki/Uroktor?oldid=863447"
Community content is available under CC-BY-SA unless otherwise noted.