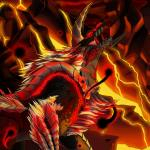 I'm HR9 and have completed almost every quest. I have beaten Ukanlos, but not yet the Fatalis trio (G rank). I'm mainly a hammer user, but I also like longswords and swords and shields. My favorite armor set is Cenataur Z, gemmed for Reckless Abandon +2, Sharpness +1, Sharp sword and Defense -30. I use Juggernaut a lot.

Currently on HR55 and working further. I'm using full Helios Z armor and mostly longswords (I'd rather use hammers, but I want to cut the tails).

Hunter rank 146 at the moment. Gold crown and done all story quests. Using a great Kushala set, which gives me Evasion+3, Sharpness+1, Focus, Heat surge and Bomb Boost. I've also made a cool mixed set, giving Honed blade, Latent power+2, Challenger+2 and Elemental. I love using the crimson fatalis hammer and just getting the highest raw I can (reached over 2000).

MY MOST HILARIOUS HUNTING MOMENTS

I once killed a Shogun Cenataur with a paintball.

I was free hunting in the Moga Woods at night. There was a zinogre in the area, along with a qurupeco. I ignored the qurupeco and focused on hunting the zinogre (I was using a hammer). Most of the hunt went on without the peco's interference, but then he came to my area. He charged at me, but I dodged. Then the zinogre charged at me and hit the peco, and he KO-ed himself! Hilarious!

I was hunting Jhen Mohran and it was minutes before the quest's end. I have already broken one tusk. At about 30 seconds left, the dragonator recharged, but he was too far from the dragonship to receive the full blow. I decided to release the dragonator, just too see what happens (I had already damaged him enough to repel him). So I've done that, and the dragonator just barely hit the tip of the unbroken tusk and broke it! And about 2 seconds after that, he fled. It felt awesome.

Carved 2 Dire blasthearts from a Molten Tigrex (how is that even anatomically possible lol), then got 2 conquest spheres from the Akantor in the next quest. In the next 2 Molten Tiggies, I got 3 hearts (5 hearts from 3 Moltens).

Retrieved from "https://monsterhunter.fandom.com/wiki/User:HellWolf?oldid=718524"
Community content is available under CC-BY-SA unless otherwise noted.