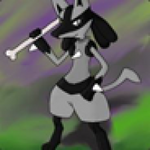 I got MH:Tri on the 27th of December and I've been playing and (trying) to survive in this monster-eat-human world. XD

Like any other video gamer, you have to have a goal to work for. I'm working on both guild gathering hall quests and high rank village quests but I dread the HR3 urgent. I hate Shen Gaoren. X_X I've strayed away from gathering hall quests and just took down the dual Hypnocatrices and I'm trying to work to fight Nargacuga. The equipment I could make me with Narga carves... Oh so smexy affinity on those weapons. ^w^

In MHFU, I'm on Nekoht's quests while in the guild gathering hall I'm working on HR3 quests. I want to be able to use Ad-hoc party to hunt with other people but my mom has no internet and let alone that I'll need a long ethernet cord to directly connect to the modem when she gets it back.

I found it very easy to memorize my online ID by making an acronym for it. It goes like this: "Two Virtual Reality Video Game Kings." (2VRVGK)

When I first stepped into Loc Lac and went out onto a quest, the experience was rather decent to my surprise. I was expecting to see a trolling scrub who was only joining quests to disrupt another player's game experience and quest immersion but to the contrary, there was another newbie hunter and we set out on quests. Unfortunately though, all good things come to an end and my good luck ran out when I came across a scrub who was solely trying to disrupt my experience along with everyone else and trolled us by completing quests through the subs. Good thing I will not come across him ever again.

Kill Narga and make armor out of him/her while upgrading the Tigrex Tooth into the Hidden Saber.

Retrieved from "https://monsterhunter.fandom.com/wiki/User:Lightna?oldid=277914"
Community content is available under CC-BY-SA unless otherwise noted.