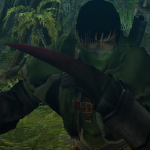 I been playing MH since MH1 on the PS2 I greatly enjoy playing MH so much that when I found a way to get on MHFO I panicked when I couldn't get it working at first.

I have also been collecting and observing info about the MH series and I rarely accept fan made info as canon, I have seen the official info on many subjects of MH most people miss or never found including Frontier info so send me a message or whatever I will see if I can answer it.

Personally I don't care what you're HR or SR is if you're HR999 on tri and you cant even kill a Jho solo dot even try comparing to me I soloed Alatreon bellow HR150 used Barioth armor and Alatreon Lance.

I mainly use GS, Hammer and Bow my skill with other weapons are not as good but I can be decent.

I usually place other peoples needs above my own when playing and either end up working harder or missing out on some stuff but I'm happy to help.

Information: Pike originally lived in Akura, a very cold continent north of the Snowy Mountains and Forest & Hills. But he currently calls Verudo home even though he is almost never home.

1 of 5
Add photo
Retrieved from "https://monsterhunter.fandom.com/wiki/User:Pike-The-Ninja?oldid=686527"
Community content is available under CC-BY-SA unless otherwise noted.