Welcome to Discussion of the Week: Unusual Weapons!

It's nearly Christmas! I'm very excited. To celebrate, I thought I'd do something different with DotW, and take a look at some weapons. Specifically the Lance that looks like a Christmas tree from Frontier, that thing's spiffing.

It is DEFINITELY a good idea to go round hitting terrible fire-breathing monsters with a giant frozen fish.

On the other hand, using a giant spatula and spoon is genius.

Damn, I really want to see the 3rd gen counter move used with this Lance. Pop.

AWWWW, it's a cute little Teddybear <3.

Bash monster's heads in with a cooking pot because why not?

It even squeaks! Yet bizarrely this weapon does have some use - against White Fatalis of all things. In Armor Mode it only really takes 'set' damage - bombs, Crag/Clust S, Wyvern Fire... and Gunlance Shells. And guess what the Large Pop Corn is actually really good at? 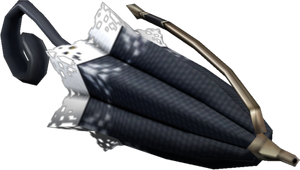 Any weapon that could be wielded by Mary Poppins is not one I can take seriously.

It's a G Weapon, so probably not completely useless... but look at it! Never try and fire arrows using half a decomposed fish, that's my motto.

Description: Depicts the terror of Moga's shores. Just watch out for other hunters' harpoons.

The scary thing is Sharq Attaq is actually usable. I've used it myself many a time against Agnaktor and Uragaan (Low Rank) and whilst it's not superamazing, it's better than the Royal Ludroth Lance for my money. Looks cooler too.

It's the Christmas tree Lance! I want one.

And finally, a Merry Christmas to you all!
Retrieved from "https://monsterhunter.fandom.com/wiki/User_blog:Lord_Loss/Discussion_of_the_Week:_Unusual_Weapons?oldid=444385"
Community content is available under CC-BY-SA unless otherwise noted.