Rumors from MH communities are circling around the net that the game Monster Hunter 3 G is getting a localization for Europe in Autumn 2012..

To make things interesting, one of our users have provided us a scan of this page from the UK Official Nintendo Magazine:

An estimate says at the Autumn of 2012 Europe would be getting a localization of Monster Hunter 3 G. Better something than nothing right?

The magazine scan is real and not edited.

As the news spread around the net, until we get a word from the Capcom Officials themselves, this does not confirm its release date nor the estimated time to be real.

Is this a beacon of hope for our western MH fans? This is interesting. :D

Credits to User:Agnaktor42 for this scan.

EDIT: So like, I was wrong in my wording about confirming it to be real. My intention was to tell that the magazine and the scan was real, not the confirmation of the date. My apologies, English is not my first language.

Japan's Wii U bundle. Available upon launch of the Wii U in Japan. 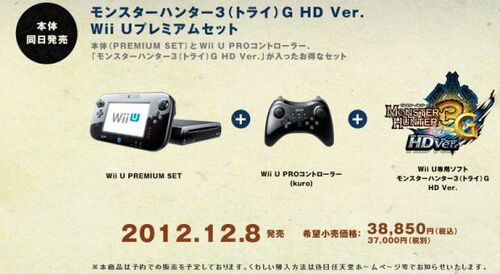