"A grotesque Elder Dragon, that inhabits the deepest part of the Rotten Vale. It uses the fatal vapor of the vale in what appears to be a symbiotic relationship."
— MHW Description

Vaal Hazak is an Elder Dragon first introduced in Monster Hunter: World. This grotesque elder dragon inhabits the deepest part of the Rotten Vale. It uses the fatal vapor of the vale in what appears to be some kind of symbiotic relationship. Their materials can be used to craft the Vaal Hazak Armor Set.

This dragon lives a solitary lifestyle, and does not allow other monsters to encroach upon its territory. While it may not always react to the presence of a hunter, it will immediately become aggressive with any large monster it encounters. They are known to bury themselves in the piles of bones which litter the environment. Vaal Hazak can collapse, and if left alone while it does so, it will charge up Effluvium for a powerful attack. This will always leave behind some Tainted Flesh. Vaal Hazak outclasses Odogaron in Turf Wars. Interestingly enough despite having wings Vaal Hazak will not fly unless it is mounted in which it shown to have just as much aerial mobility as the Kushala Daora.

For details on older games this monster has appeared in, see Vaal Hazak Guides. 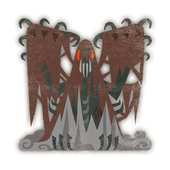 Retrieved from "https://monsterhunter.fandom.com/wiki/Vaal_Hazak?oldid=804313"
Community content is available under CC-BY-SA unless otherwise noted.