Start a Wiki
watch 01:44
What is Valphalk?
Do you like this video? 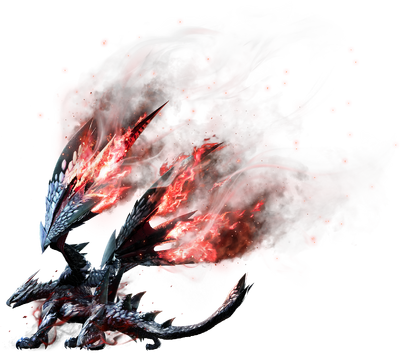 Valstrax is a slender Elder Dragon covered in gleaming silver scales. Its most notable feature is its wings, which have fused into a trident-like structure. Its back is lined with fin-like projections. Its head has a small crest and its eyes are blue. Its chest has three horizontal gaps that are used to take in and pressurize air like a jet engine.

Valstrax flies at high speed by discharging Dragon Element energy from its wings. It can manipulate the alignment and shape of its wings to vary the attacks it uses. It’s base form where the wings are in their normal position, Valstrax will commonly lunge forward and swipe at hunters with it’s front claws or try to take a bite at them. Once the hunter has reached a decent distance however it will rear back one of it’s wings before sending one of it’s razor tipped ends rocketing towards the hunter, the trident formation collapsing down and connecting at the ends to form a jagged spear. It can add two more moves to this attack, ending it with a spin while the blade is still outstretched or sending forth it’s other spear wing after retracting the first. It can also jam the trident tipped appendages into the ground and rip up some dirt along with the hunter. Also, Valstrax is able to maneuver his wings into a spear position and fire pure balls of dragon energy at you. Lastly it is able to ready it’s wings after a very short charge time and rocket towards the hunter, usually ending in a deadly spin upon landing again. Very similar to a Rathalos’s strafe flight, albeit much quicker.

The other form that the wings will lock into place is when they turn to where the jet engines are facing the front of the monster, turning the engines towards the ground until it is facing the proper direction. In this form, the wings are able to lash out like a massive claw, slam the claw down into the ground as if it’s a giant palm, and Valstrax can ignite the tips of his wings to add Dragonblight to these attacks as well as dealing additional damage. While in this form he is also able to condense his dragon energy into explosive homing projectiles that he will fire out of his six appendages after readying into a stance. He can also fire these blasts simultaneously into the ground to give him some more room from the hunter. He will switch back into his base form either by simply folding them back naturally, or he can perform a frontflip with his wings ignited to deal damage to the hunter and go back to his base form.

His strongest attack is called “Around the World.” Valstrax opens his chest intake to the fullest, sucking in as much air as possible before hopping up with a small blast and then rocketing off into the horizon. Here he will become enveloped with crimson dragon energy, becoming the red comet once more. After circling behind the hunter (or where the hunter’s back was originally facing during take off), Valstrax will do a loop in the air as he breaks the sound barrier before hurtling himself down as a fiery ball of deadly draconic energy. Afterwords he will be tuckered out for some time, allowing for retaliation. But not for long.

Valstrax is a largely nomadic monster and can be found in a wide range of environments, though it has not been spotted in volcanic environments. It is most commonly associated with the Ruined Pinnacle.

Valstrax's name comes from a combination of the English word, Valor, and the Japanese word for falcon, Farukon (Japanese ファルコン).

Retrieved from "https://monsterhunter.fandom.com/wiki/Valstrax?oldid=813912"
Community content is available under CC-BY-SA unless otherwise noted.