Velocidrome is a Bird Wyvern introduced in Monster Hunter. 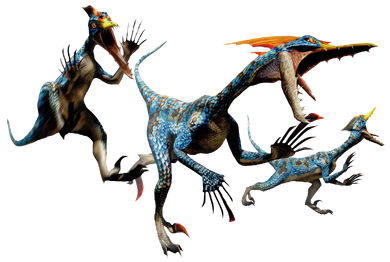 Its large, bright red crest over its blue hide signifies to other Velociprey that it is fit to be their leader.

Due to its usual weak physical strength, Velocidrome are forced to group up into packs whilst hunting.

Velocidrome acts as the leader of the Velociprey, taking responsibility of the pack. Velocidromes sometimes prefer two leaders in a pack because it improves the hunting strength of the pack and they can split into two groups for hunting.

They can usually be found in the Forest and Hills, Jungle, Old Jungle, Dawnwind Valley and Everwood regions. 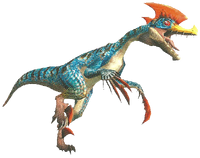 A Hard Core version of Velocidrome appears in Season 10 of Monster Hunter Frontier, with improved attacks and a new look making it the most powerful of the Dromes in the series. Aesthetic differences include red eyes, hooked beak, a different shaped crest and drooling when in Rage mode. New attacks include a spinning bite followed by tailwhip, a side-to-side jumping body-tackle and super jumping that causes small dust covers and small rocks popping up showing it is breaking the ground as it jumps. (Requires Quake resist +2 to escape).

SR100 HC Velocidrome is well known for killing hunters in one hit in even 600 defense.

At G Rank in Monster Hunter Frontier G, Velocidrome gains the ability to inflict up to 5 different status effects which are: 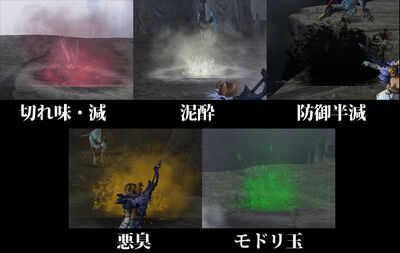 For details on older games this monster has appeared in, see Velocidrome Guides.

Retrieved from "https://monsterhunter.fandom.com/wiki/Velocidrome?oldid=810666"
Community content is available under CC-BY-SA unless otherwise noted.