Velociprey is a Bird Wyvern introduced in Monster Hunter. 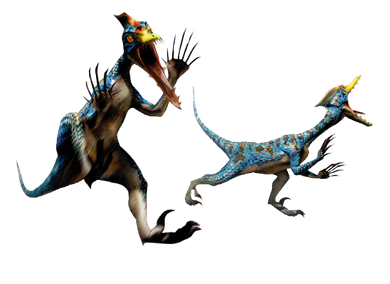 These monsters resemble dromaeosaurid dinosaurs .They have blue scales with black stripes, a dull red crest on their heads, yellow eyes, and a white belly. These carnivorous monsters travel in packs and inhabit many different environments.

An experienced hunter should have no problems dealing with a pack of Velociprey, though a hunter unfamiliar with them will have some trouble with their swift movements and quick attacks. Velociprey are capable of leaping great distances, making them difficult to flee from, especially when delivering eggs and large ores.

Retrieved from "https://monsterhunter.fandom.com/wiki/Velociprey?oldid=864133"
Community content is available under CC-BY-SA unless otherwise noted.