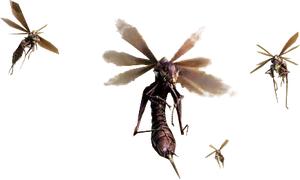 Vespoid is a Neopteron that appears in Monster Hunter: World. These Insects paralyze their targets with their long stingers. They break easily, so attack them with poison or slinger ammo if you want to carve them. They can be found in Ancient Forest, Wildspire Waste, Coral Highlands and Rotten Vale. Their materials can be used to craft the Vespoid Armor Set.

Vespoids are wasp-like insects roughly the size of a housecat. They have barbed stingers at the end of their abdomens and fly using three pairs of wings.

They are known to be a nuisance for hunters, due to their stings that cause hunters to flinch, resulting in them being exposed to any further attacks. Their stingers are loaded with a neurotoxin that can paralyze foes.

Vespoids are the target in the following quests:

The following is a complete weapon list for Vespoid weapons:

Retrieved from "https://monsterhunter.fandom.com/wiki/Vespoid/Monster_Hunter_World?oldid=777674"
Community content is available under CC-BY-SA unless otherwise noted.