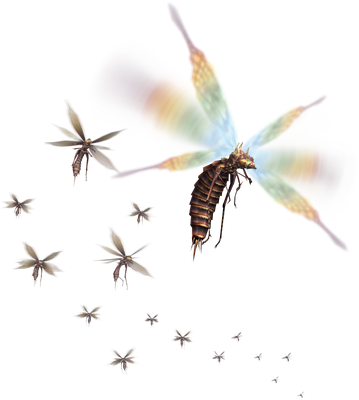 The Vespoid Queen looks similar to the average Vespoid but is several times larger, with a more pronounced abdomen and giant, rainbow coloured wings. She has a ridged exoskeleton covering her soft innards and she has a crown-like structure atop her head.

She has a large stinger on her tail that releases a gas which inflicts the Defense Down ailment. When sprayed with the Vespoid Queen's gas, the Vespoids in the area become much more aggressive.

Thus far, the Vespoid Queen appears to be limited to the Jungle and Old Jungle.

Retrieved from "https://monsterhunter.fandom.com/wiki/Vespoid_Queen?oldid=797832"
Community content is available under CC-BY-SA unless otherwise noted.