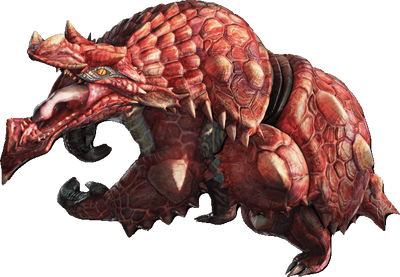 Volvidon is a medium-sized monster, slightly larger than an Aptonoth. It is covered in a series of red armor plates, which are segmented around the midsection and allow the Volvidon to curl into a ball. It possesses an extremely long, chameleon-like tongue which is covered in sticky saliva.

It is capable of spitting out a paralyzing liquid and inflicts Soiling using a foul odor. Being a Fanged Beast, the Volvidon uses attacks similar to those of Arzuros and Lagombi. It is known to pull prey and foes toward its mouth using its long tongue. In addition to aiding transportation, its ability to roll up into a ball allows it to crush foes during combat.

It will typically avoid trouble, but if cornered, Volvidon can be surprisingly aggressive. It is an insectivore which uses its long, sticky tongue to feed on Neopterons.

Volvidon is found in the Sandy Plains and the Volcano. However, though originally thought to only inhabit areas of extreme heat, it has more recently been seen in the Deserted Island as well.

A Variant of Volvidon that appears in Monster Hunter Explore.

The name Volvidon is derived from the word "revolve", with the "-idon" suffix added by the localization team to give the name a dinosaur-esque feel.