White Monoblos is a Flying Wyvern introduced in Monster Hunter G. It is a Subspecies of Monoblos.

White Monoblos features a bright white carapace covering most of its body. As a result, the flushes of blood to its frill when enraged are significantly more striking. Beyond coloration however, it is identical in body structure to the common species.

White Monoblos behaves essentially the same as its normal counterpart. When not engaged with a hunter it tends to frequently move underground, which can make it hard to track.

The shell of White Monoblos is harder than that of a normal Monoblos, thus increasing its defense.

Although restricted to deserts, White Monoblos can also be seen in the more arid regions of the Everwood. 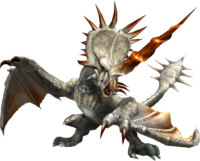