This page will attempt to explain the various regions in the game and how they fit together in the World of Monster Hunter.
Editor's note: This is a work in progress. Descriptions, translations and images to be added 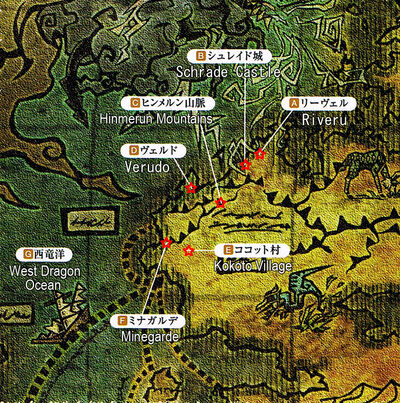 Eastern Schrade (Japanese 東シュレイド) and Western Schrade (Japanese 西シュレイド) were once a united kingdom that was a part of Schrade Kingdom. Due to an unnatural event that occurred in the center of the kingdom over a hundred years ago, the two now act independently from one another, they have even stopped communicating with each other. Now Castle Schrade is a neutral ground for them due to the fact they don't want to go to war over that territory.

Riveru (Japanese リーヴェル) is the city of Eastern Schrade and the largest province in the capital of the Republic. Riveru is a city that greatly specializes in trading. It trades with the towns that are within Eastern Schrade, allowing many to enter and exit for trading purposes. Though Riveru trades with many towns within Eastern Schrade, they won't trade a single thing with Western Schrade. Riveru is surrounded by steep mountains, making its winters longer than most other places. From these long winters, special facilities have been made to keep the people warm during those harsh seasons.

Castle Schrade (Japanese シュレイド城) was once a great kingdom in the center of Eastern Schrade and Western Schrade. Mysteriously, an unnatural event happened in the area, leading to the kingdom becoming a barren land with no life.

Hinmerun Mountains (Japanese ヒンメルン山脈), or the Mountains Near the Sky (Japanese 空へ限りなく近い山), are local mountains within the Schrade Region that divide Eastern Schrade and Western Schrade. These mountains are much longer than both Schrade and Dundorma, making them a troublesome obstacle for travelers. However, the travel is greatly shortened if one rides an airship. The west side of the mountains is warm while the east side is cold.

Verudo (Japanese ヴェルド), or the Fortified Fortress (Japanese 城塞都市), is the largest city in Western Schrade. Surrounding Verudo is a giant wall with cannons facing all directions to protect the city from incoming attacks. Though the inner city is well protected, the outer city isn't. This is due to the outer city being the home to the poor people that can't afford to stay within its walls.

Towns and Villages Within Schrade Region

Meruchitta (Japanese メルチッタ) is a new village that is within the west. This village is surrounded by a great circular lake. This lake was made by meteorites that hit the land in ancient times. As each year passes, Meruchitta gets more and more populated with people. This village has two ferries, which go to Minegarde Town and Rekusara, as well as a trading ship, which makes exchanges with a country across the West Wyvern Sea.

The Arcolis Region (Japanese アルコリス地方) is a region in the west, located within the Schrade Region. This region is south of Kokoto Village and is well-known for its mild climate, vast grasslands, and many hills. This is why the Hunter's Guild have been known to call this region's hunting ground the Forest and Hills or Verdant Hills (Japanese 森丘). Many different species of monsters have been seen in this region, such as Aptonoth, Velociprey, Yian Kut-Ku, Rathalos, and Astalos.

Metapetatto (Japanese メタペタット) is a rural area where hunter villages are known to be located. Lao-Shan Lung is said to take route here, so hunters are known to wait here to protect any villages within the area from a potential attack from this giant. Within this area is the hunting ground known as the Old Jungle (Japanese メタペ湿密林) as well as the West Wyvern Sea. From the West Wyvern Sea hunters receive and send materials to other places.

Rekusara (Japanese レクサーラ) is a village built on a desert oasis. This village is close to the Old Desert, or Dunes, (Japanese デデ砂漠) and Desert (Japanese セクメーア砂漠), so hunters are known to use it as a transit point to those hunting grounds. From the south, sandstorms are known to strike it rapidly. It is also the site of a future hunting base so rapid development is expected.

Dede Desert (Japanese デデ砂漠), better known as the Old Desert (Japanese 砂漠岩地) or Dunes (Japanese 旧砂漠), was once a sea in ancient times. It is now as a desolate desert ruled by many different species of monsters, like Cephalos and Monoblos, with only a few oases around the widespread sea of sand. These oases are known to attract thirsty creatures. Though the environment is harsh, this area is perfect for gathering some unique plants.

Sekumea Desert (Japanese セクメーア砂漠), better known as the Desert (Japanese 砂漠), is a desert whose name means an Fall of Moondust (Japanese 乾きの海). This place is primarily ruled by Piscine Wyverns and is well-known for its extreme temperature changes. At day the intense heat can easily kill a human, while at night the freezing cold can easily cause hypothermia. The temperatures and the monsters make this area a living hell for most. Recently, hunters have discovered a giant, underground lake in this desert. This lake is known to be inhabited by Plesioth and Gureadomosu. This desert was also shaped by the Sand God.

The North El De Region (Japanese 北エルデ地方) is a region covered in volcanoes, such as the Old Volcano or Volcano. Well-known for its many rare ores, the North El De Region is a popular place for miners. In fact, most of the blacksmiths in the world come from this part of the El De Region. Though this region is popular for its rare ores, it is also considered quite dangerous due to the many harsh species that live in this volcanic area. This means that hunters have never-ending jobs to both mine ore and hunt down monsters. Outside the volcanoes is a village called Nganga (Japanese ン・ガンガ) where hunters go to rest after long hunts.

The South El De Region (Japanese 南エルデ地方) is a region surrounded by the sea. This region is home to a fishing village near the shores of its volcanic belt. This village only trades with residents of the nearby islands, such as Jumbo Village, due to North El De Region's harsh volcanoes.

The Akura Region (Japanese アクラ地方) is an area covered in snow and ice. Its weather can change dramatically in an instant. It can go from clear skies to a sudden snowstorm in near seconds. Though the area is harsh, a few different species of monsters have been seen living in the region like Akura Vashimu and Akura Jebia.

Siki Country (Japanese シキ国) is a nation located on a far eastern island. Many years ago, a blacksmith from the Siki Country drifted to Schrade in search of the Arms of God (Japanese 神の腕) and had worked with the Hunter's Guild in a workshop for some time, passing on many of his technological teachings. The Siki Country is also believed to be the birthplace of the Wyverians. Thus far, the only known village in the Siki Country is Cathar.

Fonron (Japanese フォンロン) is a continent north of the Siki Country. It is home to the Great Forest and Tower, along with some rare species that most wouldn't see by any normal means. These species include Silver Rathalos, Gold Rathian, Yama Tsukami, and the legendary White Fatalis.

Jio Telado Marsh (Japanese ジォ・テラード湿地帯), better known as the Old Swamp (Japanese 旧沼地), is a hunting ground closest to Dundorma. In the past, many didn't come to this place from the poisonous muck around the environment. The poisons were in the land, the water, and even the air. Most of the time, the swampy environment can be quite muddy from all the humidity around. Though Jio Telado Marsh is a harsh environment, more and more hunters have been going to the area in order to gather the rare minerals found within it. These minerals are known to attract monsters like Basarios and Gravios.

Kuruputiosu Wetlands (Japanese クルプティオス湿地帯), better known as the Swamp or Marshlands (Japanese 沼地), is a swamp not too far away from Jio Telado Marsh. This swamp is constantly hit by rain during the day while some portions of the land are covered in poisonous muck during the night. This area has many types of aquatic vegetation along with different species of fungus. Some species seen within Jio Telado Marsh can also be seen thriving in this area like Gypceros.

Aya Country (Japanese アヤ国) is an isolated, small continent within the southeast of the sea. This place is said to have many generations of kings with absolute power over the country, though very little is actually known about it. This is mainly from the civilians of this country refusing to exchange anything with other places outside their own home. Even hunters haven't gotten any requests from the people of Aya Country.

According to the Guild, the Island District is mostly made up by a multitude of islands such as the Deserted Island and Volcano (3rd). It is also said that the Island District could be within the Old World. Thus far, only a fair portion of it has actually been explored while a majority of it is still unknown.

While the existence of the New World (Japanese 新大陸) has been known for a long time, it remains unexplored due to how far away it is and the dangerous weather surrounding it. However, recent advances in seafaring technology have allowed the Hunter's Guild to land five fleets over the last forty years to investigate the New World.[1] The voyage is long and arduous, and only in recent years has travel between the Old and New World been possible. The mysterious phenomenon known as the Elder Crossing occurs here, causing a massive migration of Elder Dragons into the region every 15 years for reasons that are currently unknown to the Guild; this also makes it the only known region where the Nergigante is known to inhabit. Furthermore, the Guild has lately observed a series of anomalies that have caused creatures from entirely different worlds to appear here, such as the Behemoth of Eorzea. 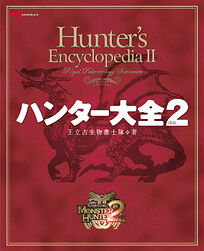