Xeno'jiiva is a large dragon with an otherworldly appearance. It has two eyes and six orange glowing spots running up the length of its horns. Parts of its body glow ethereal blue, making its skin appear crystalline and translucent. Its wings are frayed at the edge of the membrane and are grayish-blue in color. When enraged, its torso glows a hot red and orange. Upon maturing, and moulting its skin countless times, Xeno'jiiva will undergo a change that will turn it into a Safi'jiiva.

Xeno'jiiva utilizes a bright blue flame capable of inflicting Dragonblight. It fires these flames off in short bursts of 3 or as a single concentrated beam of energy. When enraged it releases more of these flames from various parts of its body as well as causing small plumes of blue flame to shoot up from the ground. While in this enraged state its body also visibly generates a large amount of heat, heating up the areas it walks over. These heated up areas can inflict fire blight. It can also take into the air while bombarding the area with its flames. Xeno'jiiva's head, wings and each of its front claws can be wounded. Its tail can also be severed. Its tail will only come off during the second phase of the fight, however enough damage can be done to it during phase one that it will be severed in a single blow once phase two starts.

Similar to Zorah Magdaros, the optional quest to fight Xeno'jiiva appears randomly after completing a quest or returning from expedition. It will only stay for a period of two quests before disappearing again. Pay close attention to the music and system messages to see if Xeno'jiiva has appeared. From Hunter Rank 16 onward, the odds of the quest appearing go up as your Hunter Rank increases. The Xeno'jiiva and Zorah Magdaros optional quests will not appear at the same time, however can appear alongside with Shara Ishvalda's optional quest. 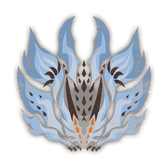 Retrieved from "https://monsterhunter.fandom.com/wiki/Xeno%27jiiva?oldid=815445"
Community content is available under CC-BY-SA unless otherwise noted.