Yama Tsukami is an Elder Dragon introduced in Monster Hunter 2. 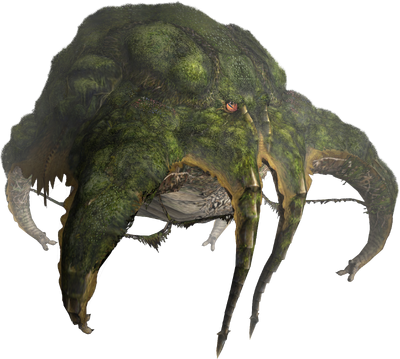 Yama Tsukami is an unusual Elder Dragon with an octopus-like body. It is covered in moss, algae, and other plant life, and boasts a set of four thick tentacles. In addition, it possesses two large whiskers and an oddly human-like set of teeth and gums. It produces gas within its body in order to keep itself afloat.

Its classification as an Elder Dragon is simply due to the fact that it does not fit into any category, much like the Kirin. This mysterious creature's place in relation to other monsters is completely unknown.

Yama Tsukami is famed for its remarkable ability to float with no support and even travel across long distances without stopping. How it does this is unknown, but it is believed to be based on hydrogen or helium gas. It seems to have a symbiotic relationship with Great Thunderbugs, which allows them to rest inside its body until they mature. In return, the Great Thunderbugs assist the monster by attacking threats. These Thunderbugs can explode when they are near an opponent, causing considerable damage to their target. It can also release burning gas from its pores, using it to attack threats.

Yama Tsukami is a dangerous creature, but it may be docile after feeding. The beast usually uses its large size and ability to fly to get itself out of most situations; however, it can become very hostile if surrounded or cornered.

Yama Tsukami have only been spotted in a few forest and mountain locations, most of them decent habitats for a large creature. They often rest at ancient towers.

Retrieved from "https://monsterhunter.fandom.com/wiki/Yama_Tsukami?oldid=850628"
Community content is available under CC-BY-SA unless otherwise noted.