Yian Garuga has a striking purple coloration, large defensive spikes, and an extremely tough shell. Its beak is sharp and jagged, and it possesses a silver mane around the edge of its face. It's body is much like that of a Yian Kut-Ku's

Yian Garuga possesses a poisonous tail club and can produce ear-splitting roars to stop foes in their tracks. It is quite crafty and will avoid pitfall traps. In addition, it is unaffected by sonic bombs.

Highly aggressive for a Bird Wyvern, Yian Garuga is known to behave similar to a Rathian, as well as sharing a very similar set of attacks.

Yian Garuga has been observed in forested areas such as the Jungle, Gorge, Great Forest, Forest and Hills, Esther Lake, Everwood, Jurassic Frontier, and Guiding Lands.

For details on older games this monster has appeared in, see Yian Garuga Guides.

For carves and materials from other games, see Yian Garuga Carves

A Variant of Yian Garuga introduced in Monster Hunter Freedom.

A Deviant of Yian Garuga that appears in Monster Hunter Generations.

HC Yian Garuga has a poison stained beak, more spikes on its tail and new attacks including: releasing a mist of poison during a tail flip; screaming extremely loud while charging at a target; screaming while jumping into the air and spitting 3 fire balls directly below. 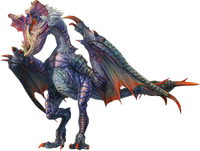 A Variant of Yian Garuga featured in Monster Hunter Online.