Yian Kut-Ku is a Bird Wyvern introduced in Monster Hunter. It is known to inhabit forested areas and can be encountered at all ranks. 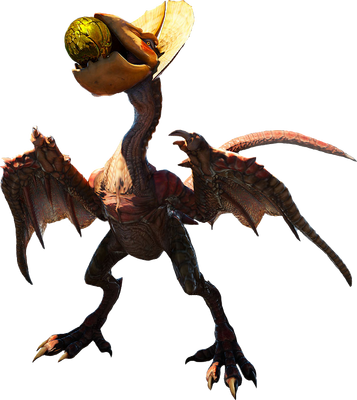 The Yian Kut-Ku is characterized by its large, fan-like ears that unfurl when excited. They have a large, yellow beak with a pink stripe running down its length. The lower jaw of its beak is significantly bigger than the top jaw. Yian Kut-Ku's body is covered in orange-pink plating and beige scales. Its wing membranes are deep blue and its eyes are bright yellow. These wyverns are small and relatively light, making them quick and agile. They have an extremely powerful sense of hearing, thanks to their large ears.

Yian Kut-Ku is capable of moving at high speeds thanks to its light weight and small stature. It it also able to produce flaming projectiles which can be shot from the mouth at attackers.

A somewhat temperamental, skittish, and inquisitive wyvern. Yian Kut-Ku have a tendency to want to appear bigger than they really are by spreading their wings, flaring out their ears, and squawking loudly. They are generally insectivores, preying on Konchu and other Neopterons as a main part of their diet.

Yian Kut-Ku inhabits many forested areas such as the Forest and Hills and Everwood.

Hardcore Yian Kut-Ku became available. This variant can perform a circular rampaging charge attack with extreme attack power, and has the ability to spew a Fire Ball that causes a wall of fire.

For details on older games this monster has appeared in, see Yian Kut-Ku Guides.

Retrieved from "https://monsterhunter.fandom.com/wiki/Yian_Kut-Ku?oldid=696358"
Community content is available under CC-BY-SA unless otherwise noted.