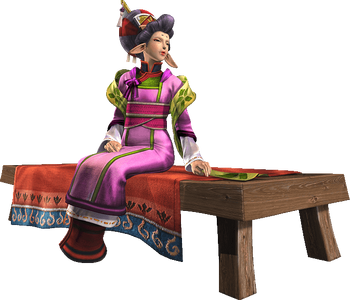 This chief is relatively peaceful and calm Wyverian with an elegant appearance.

While she was a child, Yukumo Chief had visited a number of locations throughout the land with her father, the original chief of Yukumo. From visiting these places, she had obtained knowledge on all sorts of stories that surrounded the region. Some of these stories give details about legendary monsters, like Amatsu, or advice to newer hunters. Eventually, the Yukumo Chief became the chief of the village sometime later after her father had passed. One day, the Zinogre living in the mountains began to leave them due to an Amatsu taking over their old home. This led to her requesting help from an unnamed hunter to protect the village from the Zinogre and to eventually slay the Amatsu. Once the powerful Elder Dragon was slain, Yukumo Chief revealed a deep fondness for the unnamed hunter.

Yukumo Chief wears a pink kimono with make-up on her face, resembling an Okame.

Retrieved from "https://monsterhunter.fandom.com/wiki/Yukumo_Chief?oldid=749203"
Community content is available under CC-BY-SA unless otherwise noted.