Zamite [1] are Amphibians introduced in Monster Hunter 4 and are the juvenile form of Zamtrios. 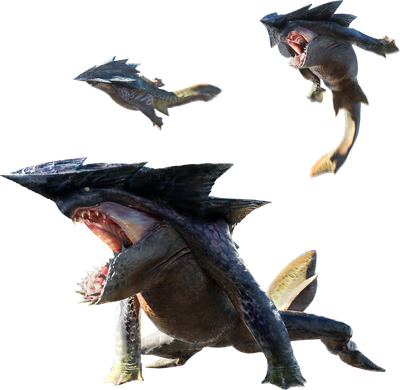 It is a small, shark-like creature whose relatively large mouth houses many rows of teeth made for attacking prey and hunters.

Zamite have been sighted in a number of different stages of development, with some having fully developed legs, while others slide on their bellies.

During battle, Zamite can grow larger when it ingests bodily fluids. These fluids also allow Zamites to grow legs if they are ingested by the individuals without limbs.

Zamite behave just like Giggi in the manner of aggressively attacking any possible food source and draining them of their vital fluids.

Retrieved from "https://monsterhunter.fandom.com/wiki/Zamite?oldid=800698"
Community content is available under CC-BY-SA unless otherwise noted.