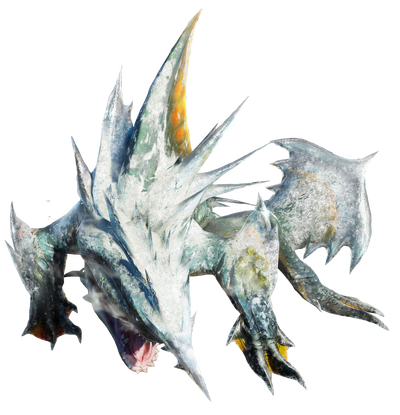 Zamtrios is a large, quadrupedal monster with grey-blue skin and yellow fins. It is superficially shark-like in appearance, with a long, pointed snout and a mouth filled with multiple rows of sharp teeth. Zamtrios is sometimes seen encased in an ice-like armor, which forms many spines and horns all over its body. As the adult form of Zamite, its limbs are powerful and fully-developed. Its skin is extremely elastic in order to accommodate its inflation abilities.

Zamtrios is capable of shooting powerful torrents of water from its mouth to blast away enemies. It can also travel beneath the ice to launch ambush attacks on prey. Using a specialized reactive fluid that is secreted through its skin, it is capable of encasing itself in an icy armor similar to that of Glacial Agnaktor. The armor also forms a long and jagged spear at the end of its snout. The reactive fluid that forms the armor can be spat by the Zamtrios to immobilize its prey. In addition, it can also fill itself with fluid and swell up to massive proportions. In this state it is capable of rolling and jumping on top of targets in an effort to crush them.

Zamtrios is a predator, known to launch surprise attacks on prey from beneath the sea ice. When sufficiently threatened or enraged, it will secrete a reactive fluid through its skin, which solidifies into an ice-like material, forming an "armor" over its skin to prevent damage.

The Japanese name Zaboazagiru is based on the Japanese words for "demon" and "frozen".

Retrieved from "https://monsterhunter.fandom.com/wiki/Zamtrios?oldid=795252"
Community content is available under CC-BY-SA unless otherwise noted.