Zenith Anorupatisu shares an incredibly similar look to its standard counterpart, however, it's already impressive nose horn has further developed. It sports a larger, triangular shape and a white color, compared to the darker blues of the standard species.

The design motif appears to be modeled after a torpedo.

Like the normal Anorupatisu Zenith Anorupatisu can send ice shards at hunters to damage them in various ways, with a "backflip" attack similarly to a Rathian, flying around in a sort of bombing raid, or breathing blasts of vapor that form three shards in a spread shot. It will also use a new digging attack where it will home in on a hunter as it drills into the ice. Whilst it is hidden underground, it selects a target (indicated by three quick flashes of ice underneath their feet) before drilling up underneath them and landing, producing a wide area of Zenith Tremor.

Starting at 2★ (GR400) Zenith level, Zenith Anorupatisu is able to utilize a double sweeping dragon beam, without needing to have taken any damage. At 4★ (GR800) Zenith level, Zenith Anorupatisu gains a powerful one-shot attack, where it jams its horn into the ice underneath a hunter, and launches them into the air. A short cutscene will play for any Hunters thrown into the air, where Zenith Anorupatisu flies up and drives the unlucky person into the ground, burying them in the ice. This attack cannot be mitigated with any armor skills, Halk Potions, Lifepowders from team mates or Farcasters, it guarantees a faint

Breaking the nose-horn of Zenith Anorupatisu will remove its ability to cause Zenith Quakes and Zenith roars, allowing hunters larger windows of opportunity to attack.

Zenith Anorupatisu can be seen living in the Polar Sea. 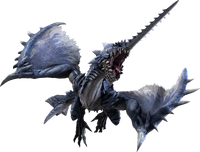 Retrieved from "https://monsterhunter.fandom.com/wiki/Zenith_Anorupatisu?oldid=804334"
Community content is available under CC-BY-SA unless otherwise noted.