Older evolved Blangonga with their fur on their torso, head, and arms largely overgrown with orange stripes in places on the arms and shoulders and two light blue stripes on the lower half of the arms, a sort of beard, two extra sets of yellow whiskers, and orange hands with red spots.

With their herculean physical strength Zenith Blangonga are capable of creating powerful shockwaves, and tossing large chunks of ice around like they were pebbles, even jumping and crashing into the ground sending chunks of ice flying into the air to rain on hunters. They also can breath out a larger ice breath attack akin to a Furious Rajangs thunder beam in size and can also roll snowballs which will trap hunters caught in them, continuously taking damage until it hits a wall freeing them.

Zenith Blangonga are kings amongst leaders even commanding normal Blangonga as if they were Blango. They retain the hyper aggressive behavior of normal individuals only amplified, trying to take down any foe as quickly as possible to protect themselves and their troops.

Like normal Blangonga they almost exclusively inhabit colder regions such as the Polar Sea and Snowy Mountains, but have been found in warmer areas like the Fortress Ruins and the Interceptor's Base. 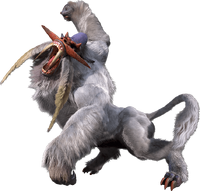