Beneath the silver armor Zenith Harudomerugu appear mostly identical to standard individuals. The biggest exception is the head. The upper half has an overall red tint, the organ in the center has grown larger, with an extra horn extending from it straight forward, while the existing horns at the back of the head have also grown larger, with the central one having two smaller extensions growing from its sides. There is also three other spikes reddish sprouting from the neck, and the red streak on the chest is absent. For the entire fight Zenith Harudomerugu has a sort of "mask" presumably made of its liquid metallic substance attached to its face, this mask alongside the tips of its four frontmost wings also have blotches of red, yellow, and blue mixed within them. Lastly the arrangement of silver armor is different in a few places, such as the chest where it is almost nonexistent in comparison to a normal Harudomerugu.

Zenith Harudomerugu possess numerous new tricks thanks to their enhanced abilities. Such attacks include taking to the air and sending the silver on the wings from each side of the body hurtling forward before landing. Flying high up before sending four decently large sphere's or liquid silver at a hunter, before barraging that same hunter over and over with dozens of smaller sphere's utilizing almost all of the silver on its body. Forming a large sphere of silver around itself before soaring sky high and crashing back down onto a hunter, those that are not hit directly but were too close end up caught in sphere's of silver which float up, and then slam the hunters onto the ground. Creating a few small puddles of silver which proceed to soar into the air then attempt to crash down onto a hunter, and covering its tail in extra silver before performing area backflips sending the silver flying forward and forming into spikes on the ground where it lands.

Zenith Harudomerugu have been sighted atop Tower 3 and have been reported attacking the Interceptor's Base. 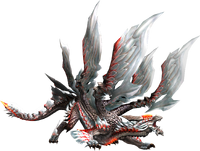