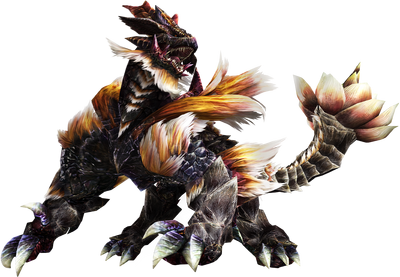 Evolved Inagami with a unique appearance. Their tufts of orange fur have a slight white tint to them, while also generally being longer. Zenith Inagami's legs and tail are covered in the same special substances that normal individuals use to cover their wounds. The developed claws are a white tipped, deep indigo color, while - together with the monster's ears - also appearing to be longer.

Zenith Inagami's tail now has a large, lily-shaped tip, instead of the spearlike appendage found in normal individuals.

Retrieved from "https://monsterhunter.fandom.com/wiki/Zenith_Inagami?oldid=830066"
Community content is available under CC-BY-SA unless otherwise noted.