An evolved Midogaron that are slightly larger and fierce than their counterpart. The mohawk-like mane that extended from their heads through tails has further developed to have longer violet hairs instead of an orange short ones. The quills on their heads grew longer with a pinkish color, while the rest of them on their necks through tails grew slightly larger with the same color as the ones on their heads. Zenith Midogaron's fur on its face and legs has the same violet color as the developed extended mane. Their claws heavy developed to have longer violet ones instead orange short ones with violet flame-like spikes on the back of their legs. Zenith Midogaron's tusks have also grown a bit longer.

When enraged, Zenith Midogaron will have orange stripes, an orange face, and the violet fur on the top of the head, back and on tail will have white tips. Also huffs of fire will emit often all around the body, and he will have flaming footsteps.

When calm Zenith Midogaron's orange stripes will turn into grayish ones and the mohawk-like mane is only a violet color which look similar to a calm normal Midogaron.

Zenith Midogaron will gain a multiple flash-step attack in 2★ (GR400) and above Zenith Level Quests, where it will appear to teleport multiple times around the arena before appearing in front of any one hunter to use its short range breath attack. If hunters are able to damage Zenith Midogaron during the fire breath, it will stagger and fall over, leaving itself open to attacks.

Zenith Midogaron lives in the Volcano and Battleground. 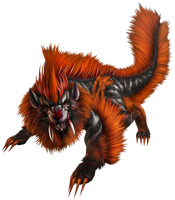