Evolved Plesioth that are larger and more intimidating than their counterparts. The big fin on their backs has heavily developed into a larger sail that's similar to a Dimetrodon's. Their heads in addition to having lighter scales have also heavily developed, now sporting a large, light blue tipped head fin with several light blue hooked spikes lining each side of it. Additionally, they have developed five long and jagged tusks located on the side of their lower jaws. Lastly, they have short and spiked appendages instead of normal fins on the side of their heads.

Unlike Plesioth, Zenith Plesioth bodies produces green gel-like substances that aids them in battle by trapping hunters inside them. They will coat themselves in the substance by upchucking a large blob of it and flopping around in it for a few seconds, after this by wiggling, or moving their bodies including the "chicken walk", they fling this substances at hunters as well leaving large globs of it everywhere. Zenith Plesioth can also Hip Check the substance on hunters and flap their wings in front of them. If hunters get trap by the green gel-like substances, their health decrease rapidly as they drown in it.

Zenith Plesioth are much more aggressive compared to normal individuals.

Zenith Plesioth can be seen living in the Desert. 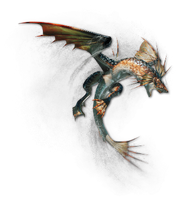