View source
watch 02:46
The Quarry - The Loop
Do you like this video?
Play Sound

Old and evolved Taikun Zamuza that appear similarly to one's in Phase 2 and 3, with various differences.

The outer armor's claws are noticeably bigger with the lower half of the pointed pincer now being wider and sort of being made of two parts that look like the top half and are just as long and large, along with a singular spike growing out from the back of each "half". The claws also have a bunch of dirt, barnacles, mushrooms, rocks, and some plants on them.

In the unarmored state the spikes on the legs and claws are noticeably absent, with blue bulb-like electric organs present in their place. The claws are also quite a bit thicker, longer, and overall bigger compared to that of a standard unarmored Taikun Zamuza.

Zenith Taikun Zamuza don't hide behind mushroom spore clouds and instead put their even greater physical strength to work to crush and tear into hunters, send them flying with powerful shockwaves from their hammer claw strikes, by jumping and trying to land on them, or even charging an especially powerful blow with the hammer claw before slamming it to create a shockwave strong enough to send hunters hit by it flying out of the area.

When damaged enough they'll tunnel away before charging back into the fight ready to use the electricity organs to fry their opponents, in ways like jumping into the air and landing while slamming a claw into the ground, creating an electric sphere in one of their claws before hitting it against the ground creating an electrical blast, creating a sphere with each claw and smashing them together for an even bigger blast, and spinning rapidly before blitzing around the area trying to mow hunters down. Lastly is an attack where they jump back before quickly doing a forward leaping swing of a claw, if a hunter is hit by this they'll be launched into the air, where they will then get sent flying across the area via another swing of a claw.

Zenith Taikun Zamuza are much more prone to attack compared to their kin, lacking the environmental armor they don't seem to try and hide as much, if at all.

Like the standard Multi-Shell Crabs these behemoth's dwell within the caverns of the Tide Island. 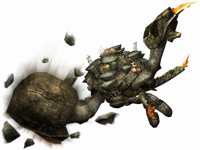